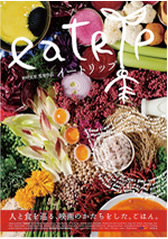 DINNER TIME!!!
“eatrip” is a wonderful consideration of people and food. Try it! You’ll like this delectable morsel, this jovial dinner time, this lovely nibble at the link between people and food. To eat is indeed to live. Life is just an “eating trip” (eatrip).

People eat. That is how we survive. For humans, however, eating has become more than just sustenance and replenishment of nutrients. It has become an opportunity for bonding with others, for chatting about what we’ve been up to, and asking about our loved one’s days. The act of eating is also the act of interacting with nature. Meat, vegetables, fruit and grain are all living organisms that combine to sustain us. And if life is a journey, then surely eating is an excursion in itself. After all, is not life a series of dinner times?? Are our lives not sequences of feeding, nurturing and growing??

About the film
“eatrip” is the directorial debut of food coordinator, creator and teacher, Yuri Nomura.
“eatrip” explores the interpersonal relationships that food nurtures. To eat is a universal experience and this documentary takes the audience on a journey throughout Japan looking at how life can be led optimally through the daily ritual of eating. From the Tsukiji fish market to an Okinawan farm, the film offers poignant interviews with intriguing personalities, a few of whom include: Nichiji Sakai, head monk of the Ikegami Honmonji temple; Kanji Takahashi, a distributor of Japanese soup stock (Bonito broth); Naoko Morioka, an Okinawan leading a self-sustainable lifestyle; So-oku Sen a tea ceremony master and descendant of famed Sen No Rikyu; and Yayako Uchida, a musician and writer who recites poems about food.
“eatrip” culminates with a passionate meal cooked by the director herself, for actor Tadanobu Asano and singer UA and a handful of other eclectic guests.

Director’s statement
Eating – a common non-verbal bond between people.A momentary relationship between mankind and food.
We captured this on film.

Food is “common to all people”. Sometimes it has a more persuasive powerthan words. We can understand a lot just by having a meal together.”Eatrip” is not about the physical distance travelled, but the relationships inand around food. It is the sharing of time, experience, memories and coexistence.

Food is my occupation. The reason I wanted to make this film was my mother,who was the starting point for me. My mother is a vibrant person, who cooksfor all the family and handles the household.My irreplaceable universal memory of food is one of the daily spectacle of abeautiful table setting. I thought that focusing on the “material instinct” was animportant element in knowing the beginnings of humanity.

To the “Eatrip” creative team the power that food exerts in everyday life cameas a surprise. Even if people were to stop eating they would still feel theoverpowering need and value of food. It leaves such a discernible firm imageon our memory and feelings that it eclipses all else.
Eating is freedom. Therefore, I think that peeping a lookat people’s appetites, even in today’s Japan, is splendid. It is an entrance intothe delights of food, and their lives.

You suddenly look back, in a happy frame of mind, at your life. You canretrace your memories of food. It is an opportunity to go beyond it being just atasty meal to it being a fond memory that can be “recalled” in the future.It is to think that this is” the energy that lives”.

Festivals
the Documentaries of the World section of the Montreal World Film Festival 2009
http://www.ffm-montreal.org/

Bring “eatrip” to your city!
Send an email to info@tokyogohan.com for more details.
*If you use “eatrip” as part of a screening, workshop or any other way please let us know!